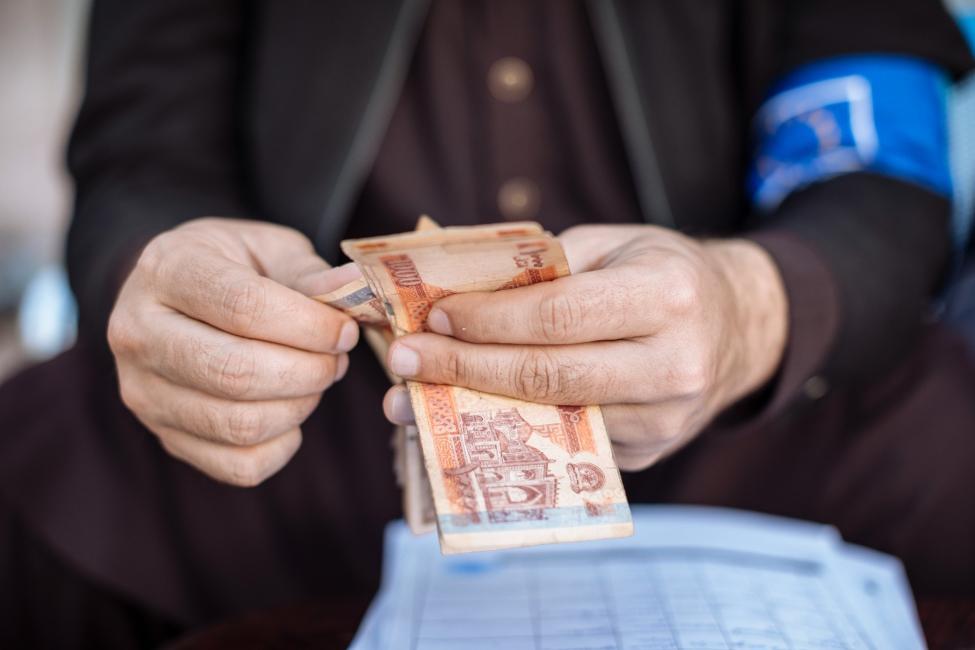 Remittances by overseas migrant workers to their home countries are increasingly critical for families and the wider economy. Photo: Muse Mohammed/IOM

Berlin – The number of migrants in the labour force worldwide has tripled in the past decade, and the remittances they send home to lower- and middle-income countries outpaces foreign aid, a new report from the IOM Global Migration Data Analysis Centre (GMDAC) shows.

The report shows that migrant workers play an increasingly important key role in development in many low- and middle-income countries (LMICs). Money migrants send home from their host countries has exceeded foreign direct investment and overseas development assistance to LMICs since 2018, according to World Bank estimates. In some countries – including El Salvador, Lebanon, Kyrgyzstan, Tajikistan and Tonga – these remittances made up more than 25 per cent of total GDP in 2020.

“The availability of timely and reliable data can help us maximize the potential of migration for development,” said Ugochi Daniels, IOM Deputy Director General for Operations.

“Many of the challenges faced daily by people on the move, especially those most vulnerable, like victims of trafficking, and women and girls are staggering. This reports highlights, among many elements, the invaluable contributions migrants have in our communities and economies, and the need for concrete action to increase legal channels and protection measures to undermine smuggling and trafficking networks.”

The report – launched today following the Portal’s fourth anniversary this week – features information trends and insights on more than a dozen migration topics, including migrant workers, the impacts of COVID-19 on human mobility, and future migration trends.

The report highlights the increasing demand for migrant labour, as exemplified by the many migrants in roles considered ‘essential’ during the pandemic. According to the latest available data from the Organisation for Economic Co-operation and Development (OECD), for example, foreign doctors account for 33 per cent of the total in the United Kingdom. The reliance on foreign healthcare workers is similar in other high-income countries, including the United States, Germany, France, Spain and Italy.

Worldwide, migrant workers number nearly 170 million, according to the latest International Labour Organization (ILO) estimates, more than three times as many as the 53 million foreign workers in 2010. Unlike the total number of all migrants, which has remained relatively steady when compared to the world’s population, foreign-born workers play a growing role in the labour force.

Migrants make up an estimated 5 per cent of the global workforce today, compared to less than 2 per cent in 2010.

“As we celebrate International Migrants Day this week, this report stands as a clear reminder of the role migrants play in the development of their communities worldwide,” said Frank Laczko, IOM GMDAC Director.

“But while the global economy continues to rely heavily on migrant workers, people continue to face terrible risks when they cannot access legal pathways in their search for better opportunities.”

While migration policies are difficult to measure, the data available show a trend toward limiting such safe, legal migration options. International Migration Policy and Law Analysis (IMPALA) data on OECD countries reveal a tendency toward increasingly restrictive migration policies since at least the 1990s, according to the report. This is echoed by evidence from IOM’s Migration Governance Indicators (MGI).

Eighty-one per cent of countries participating in the MGI assessments have at least one government body dedicated to border control and security, but only 38 per cent have a defined national migration strategy, with an even lower number, 31 per cent, aligning it with their national economic development strategy.

During the past 12 months, the Migration Data Portal received more than 2 million unique page views and more than 1.3 million users. Since launched, the Portal has received financial support from IOM Member States, including the Governments of Germany, Switzerland, and the United States, as well as unearmarked funding granted to IOM and internally allocated through the Migration Allocation Resource Committee (MIRAC).

The Actiris Coordination Platform was officially launched in Brussels, concluding the conceptualization phase!