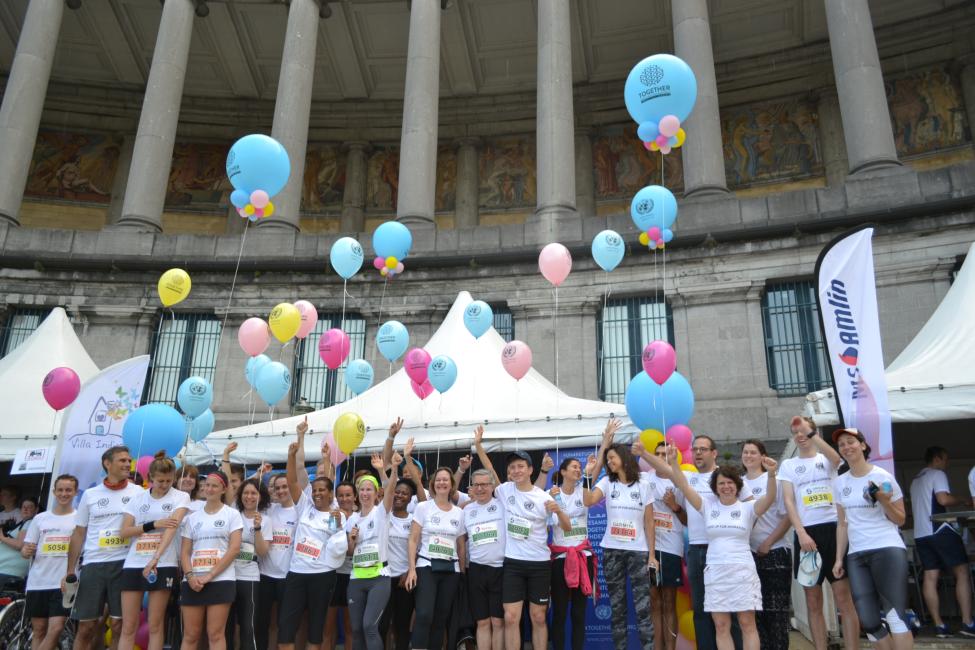 Brussels - In collaboration with the United Nations Regional Information Center (UNRIC), the UN Migration Agency (International Organization for Migration – IOM) has set up for the 4th time a team, the UN Migration Team, to run&walk under the colours of the Together campaign at the 20 Km of Brussels on the 28th of May 2017.

The team comprised 50 participants, representing several UN agencies in Brussels, the European Commission, the Belgian Ministry of Foreign Affairs and Belgium Plays 4 Peace, among others.

As a “first” this year, the UN team held a stand in front of the Cinquantenaire Arch that provided opportunities for discussion, and information on the campaign and on the UN activities in Belgium, Europe and world-wide. Balloons, bracelets and bags were also offered to the public.

TOGETHER is a global initiative that promotes respect, safety and dignity for everyone forced to flee their homes in search of a better life. Aimed at changing perceptions and attitudes towards refugees and migrants, the campaign was initiated during the UN Summit for Refugees and Migrants on September 19th 2016.

During this gathering, the UN Migration Team conveyed the following message: “Together, we can change the narrative, in support of non-discrimination and acceptance of refugees and migrants”.

This event was widly covered in the global IOM Newsdesk on 31st of May2017 and featured on the Together homepage.

Have a look at some great memories of this event: bit.ly/2s6ySmh and the wrap-up video.

You can also view the press release in English, French and Dutch.