Who are unaccompanied migrant children?

An unaccompanied migrant child (UMC) is a child, as defined in article 1 of the Convention on the Rights of Child, who is separated from both parents and is not being cared for by an adult who by law or custom has responsibility to do so. (Committee on the Rights of the Child)

Why do children leave their country?

According to UNHCR (2021), 24 million children around the world have been driven across borders by conflict and violence.

Statistics on Child and Young Migrants 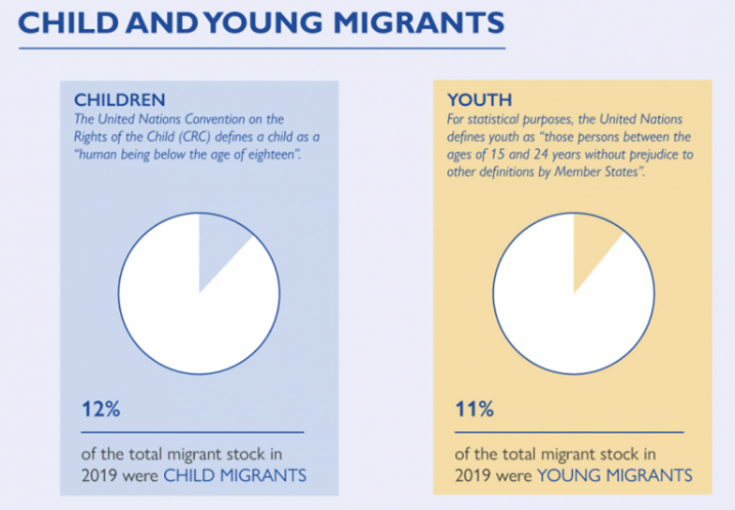 While all EU Member States, including Belgium, have ratified the Convention on the Rights of the Child (CRC), the legislation and practices that applies to UMC are not fully harmonized between countries even tough these children are particularly vulnerable and may easily fall victim to criminal networks. The European Union (EU) defines an “unaccompanied minor” as a non-EU national or stateless person below the age of 18 who arrives on the territory of the EU States unaccompanied by an adult responsible for him/her, and for as long as s/he is not effectively taken into the care of such a person, including a minor who is left unaccompanied after s/he has entered the territory of the EU States. (Source: 2011/95/EU Directive)

The issue of UMC has been growing in the last decade and is now a permanent trend in EU and international migration. The new comprehensive EU Strategy on the Rights of the Child and the European Child Guarantee are “major policy initiatives put forward by the European Commission to better protect all children, to help them fulfil their rights and to place them right at the centre of EU policy making”.

Moreover, the European Commission presented on 23 September 2020 the New Pact on Migration and Asylum, which also lays down the protection of vulnerable groups and children. To this regard, the new rules will ensure that the best interest of the child is the primary consideration in decision-making and during screening procedure individual assessments will consider children’s specific needs, with tailored actions that reflect children’s particular needs at every stage. Particular attention is being paid to family reunification, by extending the notion of family members to include siblings and families formed in transit countries.

Previously, the European Commission released the ‘EU Action Plan on Unaccompanied Minors’ (2010-2014) which aimed “to provide concrete responses to the challenges posed by the arrival of significant numbers of unaccompanied minors in the EU territory, while fully respecting the rights of the child”. This common EU-wide approach had three main strands of action: to prevent the unsafe migration and trafficking of children, to provide appropriate protection and to find durable solutions while taking into account the best interests of the child as a guiding principle. The implementation of the Action Plan was accompanied by a mid-term report in September 2012 and a Staff Working Document covering findings and achievements under the Action Plan for the period of mid-2012 until end of 2014.

For more info on the work of IOM regarding protection of child migrants, have a look at the dedicated webpage of IOM's regional EEA office.

IOM Belgium is currently managing the Unaccompanied Children in Alternative Care (U-CARE) project that aims to strengthen and improve alternative care for UMC in Europe. Learn more about the project here.

Prior to the U-CARE project, IOM Belgium was involved in the successful implementation of the Fostering Across Borders (FAB) project (2018 - 2019) which aimed to improve the quality and expand the availability of family-based care for UMC in Europe. For more info on the FAB project and to access the tools, visit the webpage here.

Read more about our past UMC projects here.

Protection of Children in Migration

New Pact on Migration and Asylum